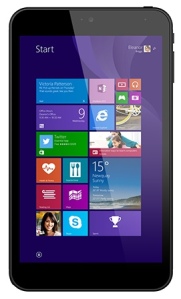 So, as a bit of research and development, I bought a Linx 7 tablet the other day. It was pointed out to me by my pal Paul Webster, who thought it had some intruiging digital inclusion possibilities.

First up, the bad bits. The Linx is cheap, and nasty. It has a plastic case that feels less than sturdy, a tiny screen with a fairly terrible resolution, a pretty slow processor and a measly 1gb RAM.

It also runs Windows 8, which is just as weird as everyone has told you. The most bewildering part for me, still, is that you can have two copies of the same application installed and running on the same machine depending on whether you are in the mobile view or the traditional desktop view. The universal apps of Windows 10 will hopefully fix this.

So, a pretty damning review so far. However, here is the good news: The Linx 7 is £76 on Amazon right now, and that includes a year’s subscription to Office 365. That’s worth £79. Do the maths!

The Linx also features some rather neat connectivity options. There’s a mini-USB port which is used for charging, but can also be used with the included adapter to plug any USB peripheral into the tablet – such as a mouse, or a printer say. The mini-HDMI port means you can plug this thing into a standard monitor you have lying around, and it has bluetooth so a keyboard is no problem.

What all this means is that you can have a fully operational – if slightly underpowered – PC with the full and latest version of Office running on it, for significantly less than a hundred quid. That’s frankly amazing.

Anyone who makes heavy use of their computer is not going to be able to use the Linx 7 as a replacement for their laptop or whatever. Never mind an iPad, it makes a lot of the cheaper Android tablets look and feel well made. But what it does, thanks to the price point and the provided software, is put a proper computer in the hands of pretty much anyone who can spare 75 quid.