Roy Keane has confirmed that he’ll be retiring when his contract runs out in 18 months’ time. 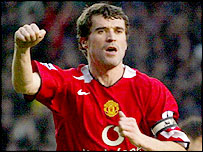 Obviously, as a Forest fan, I’ve followed Keane’s career over the years, and I have to say I have never felt much antipathy for him since he left us. I’m just pleased that he has come back and proved so many of his critics wrong this season. There was an excellent write-up about his resurgence in The Guardian earlier this week.