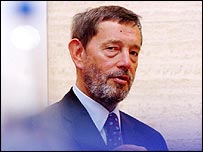 Blunkett returns in new Cabinet, according to the BBC:

David Blunkett has returned to the Cabinet as work and pensions secretary as Tony Blair reshuffles his top team.

In other changes, Alan Johnson takes the new post of secretary for productivity, energy and industry.

Mr Blair said he had “listened and learned” after the election result.

The prime minister acknowledged the Iraq war had been “deeply divisive”.

But he said he believed people wanted to move on.